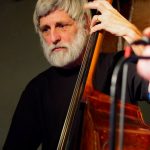 George and I appeared on Phil Andrus’ weekly radio show, Tossed Salad (1-5 p.m. on Fridays). I played guitar and George made his radio debut on chromatic harmonica. Guitar and harmonica have a great blend. I have been working on the chromatic myself, but it will be some time before I take it out into the world. George has been practicing it for awhile- time to make him sweat.

Tap below to listen to a recording of us talking with Phil Andrus about the joys and challenges of playing the chromatic harmonica. We played jazz tunes and some Christmas songs, too. Thanks to my friend, Stephen Breathour, for making the recording.