Chuck is a native Washingtonian, having grown up in Mt.Vernon. Both of his parents were public school music teachers, so it was natural for him to play from an early age. He started on violin then switched to bass in high school, playing classical music in the orchestra and also trombone in the band.

He slowly became aware of jazz, which has now become his major focus, although he still plays bass in the Pt. Townsend Orchestra and various classical groups. After a stint in Korea with the U.S army, where he got to play electric bass and electric guitar, the electric guitar won out, becoming from then on his primary instrument.

Chuck graduated from Boston’s Berklee College of Music in 1980. He has played many different styles of music over the years, but bebop-influenced jazz is his favorite. Chuck has been teaching private music lessons at Crossroads music in Pt. Townsend, Washington, since 1995, with students of all ages on flute, trombone, saxophone, guitar, bass, piano and clarinet.

For many years he has been on faculty for Centrum’s Jazz Pt. Townsend and the NW Big Band, where he was the conductor for a number of years. Chuck continues to play locally on guitar, bass, flute, alto and tenor saxophone and occasionally Eb tuba and trombone.  He plays in duos, trios, quartets, quintets and has a sextet which plays both jazz and R&B dance music with vocals and a horn section.

Chuck and his wife, Autumn, live on five acres on a wooded ridge south of Chimacum, Washington, facing the Olympic Mountains. 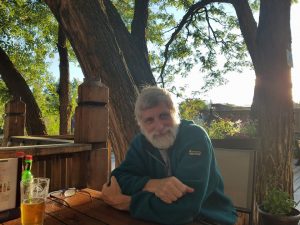 Chuck celebrating his birthday at The Duck in Winthrop.